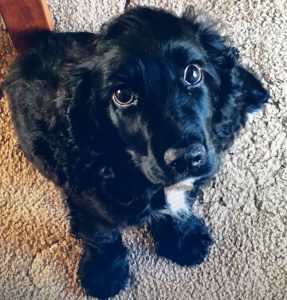 One of the most important skills Neuro-Linguistic Programming (NLP) teaches you, is how to model examples of excellence. We can model human behavior by mastering the beliefs, physiology and specific thought processes that underpin the skill or behavior.

I was fortunate to be trained many years ago as a Master Practitioner of NLP by one of NLP’s original creators and have found modeling extremely useful in my coaching work when working with elite performers and those who want to take their performance to the next level.

A Model of Fearlessness, Focus and Resilience

I have learned much about fearlessness, focus and resilience, from my work with special-forces operators and elite athletes. It dawned on me today that I have the ultimate example of these qualities at home that would rival any modern day warrior or Olympic athlete. That model of excellence is my puppy Buddy.

Buddy is always willing to try new things and never hesitates. He just goes for it without fear of the consequences. A recent example of this was when he dived head first into a cold pond and completely disappeared from sight. He had never been in the water before. To my relief he surfaced a few seconds later and came and shook the water all over me, before diving back in.

When Buddy locks his sights on something – usually food or another dog – then he is oblivious to anything else around him. He develops this incredible tunnel vision and it doesn’t matter how loud I call to him; he is 100% focused on his target. He may as well been trained by my recent show guest, former Navy SEAL and SEAL Sniper Head Instructor Brandon Webb .

From time to time Buddy gets into scraps with other dogs; usually bigger dogs. Or he will fall off the sofa and land on his head or misjudge the jump into the backseat of my jeep and land in a way that would make any guy wince. But not Buddy. He simply picks himself up, no whining or looking back. Just looking forward to his next mission.

There are many books, articles and schools that purport to show humans how to train dogs. I can’t help thinking we humans could learn a lot from Buddy and his fellow dogs.

I asked Buddy if he would be willing to be my guest on The Outperform Show, but he declined saying he had to focus on achieving his goals and not helping me with mine…

PS. I wrote this post 2 years ago. This summer Buddy proved himself to be a real hero when we woke my wife and I up at 3am because our bedroom was on fire. I was out cold because of the smoke fumes but rather than save himself and escape Buddy kept barking and jumping on top of my wife until she woke up. Thanks to Buddy we escaped with minutes to spare before the top floor went up in flames. Buddy suffered as a result with chemical poisoning and PTSD but thankfully is on the road to recovery.